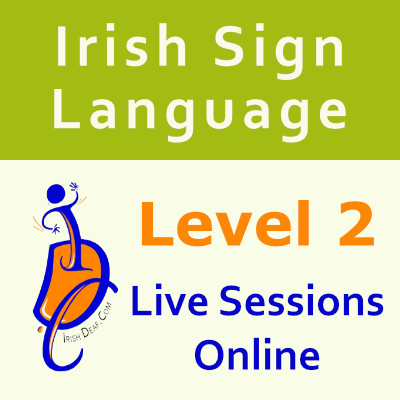 Book your place to enrol – https://shop.irishdeaf.com/live-sessions-online-for-level-2

Session once weekly on Thursdays at 5:30pm

The Doro PhoneEasy 100w is a well designed, attractive, simple to use cordless phone with a good range of standard features and an easy-to-read display.

One view is that the PhoneEasy 100w is a really good value-for-money choice. It offers all the features you would expect and has good sound quality, at a really affordable price.

This product has a degree of inherent hearing aid compatibility – some digital hearing aid users find the level of noise interference low enough to use directly with their hearing aids.

The Swissvoice D28 easy to use clamshell phone is a great model for anyone who would like a hearing aid compatible mobile phone that is simple and functional.

For ease of use the D28 has a simplified menu as well as large comfortable keys, speaking numbers and a 10 photo speed dial feature which allows you to call family or friends at the push of a button.

It has excellent clear sound as well as a volume boost of up to 35dB and it also has extra loud ringtones of up to 90dB so you don’t miss any important calls.

The D28 is equipped with two displays, the large 2.8 inch high resolution screen on the inside and an external display on the outside. The external display is an ‘E-ink’ display, similar to a screen on a Kindle type device – this shows you the time, the caller name or number and notifications for any messages waiting.

One unique feature is that the phone will ring louder when the same caller tries again immediately and for extra safety there is an SOS button located on the back of the phone. When you press this it sends a pre-recorded text or voice message to up to 5 people.

The low profile pillow speakers simply slip under your pillow to allow you to listen in privacy and comfort to any radio, CD or cassette player, etc., that has a 3.5mm stereo speaker/headphone socket. They are wired together so you don’t lose one (!) but you are still able arrange them comfortably under your pillow.

Many sufferers of tinnitus have also found relief using a pillow speaker connected to a radio tuned off station.

Use with standard or king size pillows.

Does not require batteries or power.

This value-for-money product is designed to help you relax and meditate and can help to relieve the symptoms of tinnitus. If you struggle to dose off to sleep or simply require some soothing distraction sounds then this sound dial can help. Simply switch on and choose from one of the 12 realistic nature sounds and ambient compositions.

Any of the sounds help to relieve any stress or insomnia after a long day and the nature sounds offer respite from the effects of tinnitus. With a simple to operate design, this is ideal for anybody with limited dexterity and it’s compact size, along with headphone socket, allows you to take it with you on your travels.

You can also set a timer on the device, that includes 30, 60 or 90 minute options with the choice of optional fade, which can really help you to drift off to sleep naturally without worrying about turning it off.

Avaliable to purchase at: https://shop.irishdeaf.com/lifemax-soothing-sounds-dial

The Amplicomms BigTel 1580 Combo has good volume levels and this combo is a great option for anybody who would like the security of a corded landline phone coupled with the mobility of a cordless handset. Particularly useful for any senior user as the phone is really simple to use and with the extra handset you can have another phone placed conveniently within the home.

Designed for comfort and practicality, this is an entry level combo with good clear sound and an extra loud ring of up to 90dB. There is also an integrated answering machine as well as three direct dial memory buttons so you can reach family and friends with ease.

The BST-80 can be used to stream your music playlists from your phone or tablet via Bluetooth during the day, and your Sound Oasis Therapy Pro App sounds at night, to help provide you with the best sounds for relaxing and sleeping during your travels or at home.

This sleep sound machine comes with a built-in micro SD card that is fully-equipped with 20 Sound Oasis sleep sounds and can also be loaded with pre-made playlists from extensive libraries on SoundOasis.com. You can create a custom sound card from the Sound Oasis sounds library to get the exact mix of sounds you prefer.

Masters research: To What Extent is the Government achieving its obligation under the UN Convention on the Rights of Persons with Disabilities when it comes to Employment Services?

My name is Tina O’Rahilly and I am currently studying for a Master’s in Public Policy in Dublin City University. Following a cycling accident a number of years ago where I suffered a traumatic brain injury, I now have a disability. As someone that was told they may never work again, it has led me to the area concerning people with disabilities and the services available to them when it comes to employment.

You are invited to participate in an online survey for a research paper entitled “To What Extent is the Government achieving its obligation under the UN Convention on the Rights of Persons with Disabilities when it comes to Employment Services?”. I am conducting this research as part of a policy analysis exercise. This survey consists of 10 questions and should not take more than 10 minutes to complete. Your replies will be anonymous and there is no option on the survey for you to put in any of your personal details. Completion of this survey is completely voluntary. Returning the survey through the submit link at the end of the survey indicates your consent for use of the answers you supply.

END_OF_DOCUMENT_TOKEN_TO_BE_REPLACED

Hello everyone! I’m Robyn and I am a PhD researcher at the University of Limerick. I am looking for deaf people who use ISL and are over the age of 18 to be involved in focus groups (group discussions) about ISL Recognition.

END_OF_DOCUMENT_TOKEN_TO_BE_REPLACED

The Wake’n’Shake Curve is physically smaller than the original Wake’n’Shake and is easier to use, however it doesn’t have the telephone alert feature.

The Wake ‘n’ Shake Curve is a really attractive, modern clock. It is easy to use and has great features for deaf and hard of hearing people. The ability to charge a USB device is handy.

The Wake’n’Shake Curve has a built-in USB charging socket on the back, allowing you to charge smart phones and other electronics (mobile phone not included!).

This clock is easy to set up and use, with clearly labelled buttons on the top.

It has a very good vibration and very loud sound. The clock has a particularly large digital display with numbers approx. 46mm tall. There is a 3 stage dimmer so you aren’t disturbed by the screen at night. There is also an integral bright LED light which can be set to flash for a visual alarm.

The modern and stylish Wake ‘n’ Shake Curve digital alarm clock has a bright and clear, large display and can wake you with sound, flashing light or a vibrating pad. It also has a USB phone charge socket.